I’m going to say it right now, Hal Jordan and the Green Lantern Corps should go down as one of the best runs in all of Green Lantern history. Fifty issues filled to the brim with epic space confrontation, dramatic twist and turns, and friendships you never knew you wanted, but can get enough of. So now that it’s been some time since the conclusion, it’s time to countdown the ten best moments from the series. It should go without saying, but there will be spoilers ahead. Read at your own caution, enjoy. 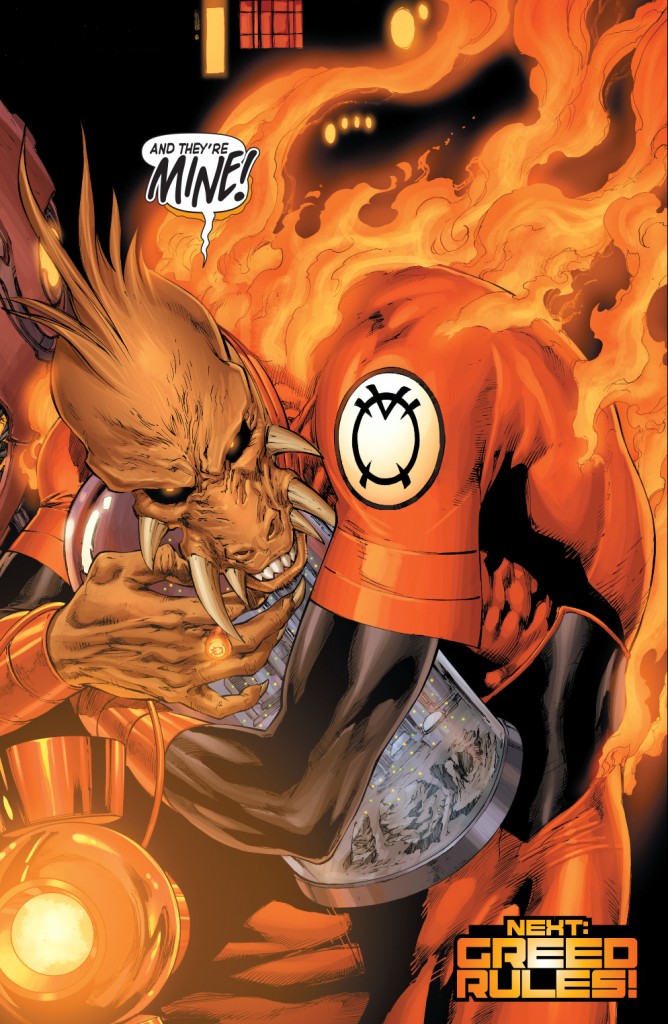 I’m going to take you back ten years ago. The Blackest Night was upon us and Geoff Johns introduced us to the most bizarre ring bearer within the emotional spectrum. Larfleeze in his debut appearance was actually intimidating, but Lafleeze was quickly changed to be a Scooby-Doo villain. So it was a complete surprise to see Larfleeze regain a bit of the terrifying factor back. The icing on the cake was having Larfleeze control a Brainiac bot. Even though this was Larfleeze’s only appearance during the entire run, I’m eternally grateful that the goofy side of the Orange Lantern has been drastically turned down. Hopefully whatever writer decides to continue to particular characterization for Larfleeze. It’s only so low on the list due to this one appearance, but it’s still a great moment regardless.

#9: The Return Of Krona’s Gauntlet 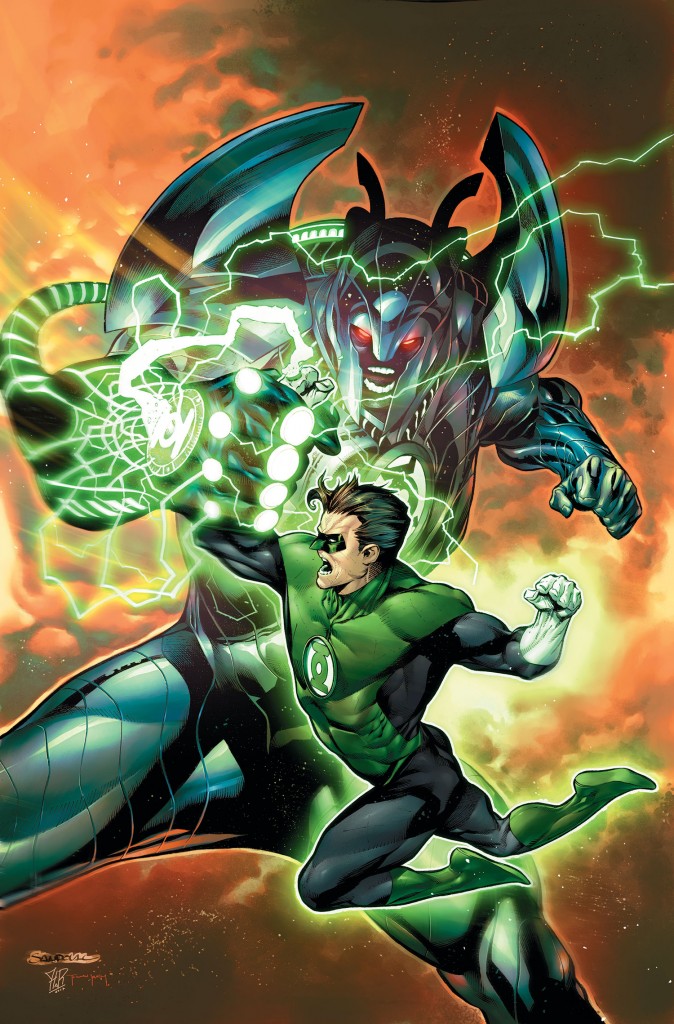 Hopefully some fans will remember that Robert Venditti’s actual run on Green Lantern didn’t start from Hal Jordan & The Green Lantern Corps, but he took over right after Geoff Johns left the book in 2013. Fast forward several years to Hal becoming a Renegade, all the while using a stolen Gauntlet that was made by Krona. Once the Renegade story line ended, I fully expected for Krona’s gauntlet to become a forgotten memory, but Venditti manages to bring back the gauntlet that actually connects to the future between Kyle and Natu. Similar to Larfleeze, the gauntlet only has one appearance but it was a super sick surprise to see a call back to Hal’s renegade arc. 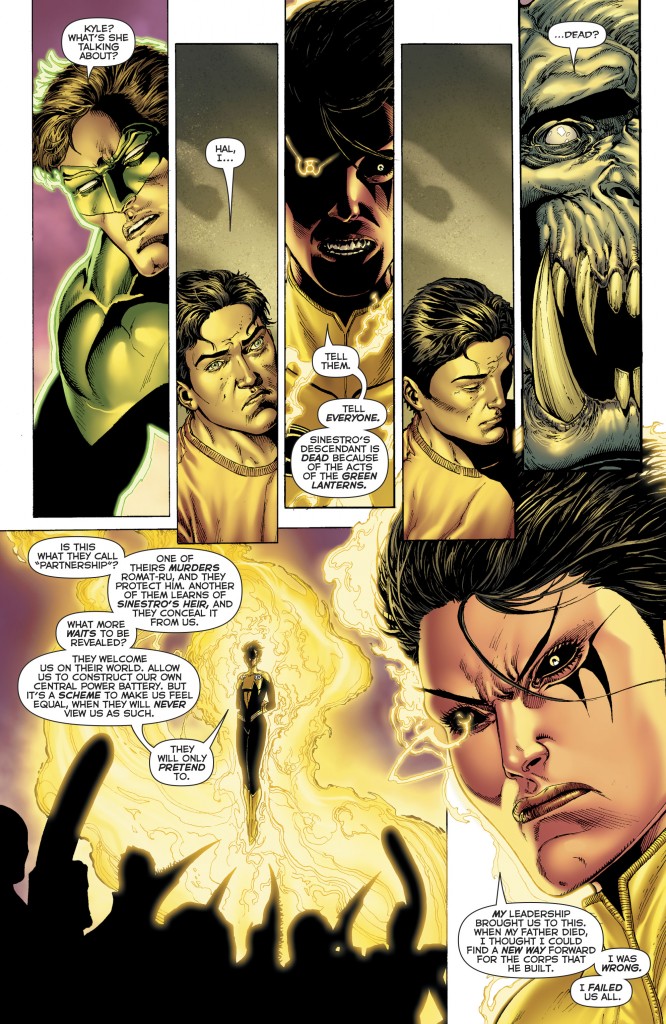 There are lot of fans who love Natu, even though she’s been around for thirteen years she still feels relatively knew in comparison to other Green Lanterns. Now I didn’t read Sinestro’s solo series, to see how she became leader of the Sinestro Corps, One thing that Natu has been adamant about is that she refuses to become like her father, Sinestro. While I wasn’t the biggest fan of seeing Natu slowly fall from grace (because Kyle lied to her about killing their future child), I will admit that it shocked me entirely, and not only did Natu’s malevolent deeds fracture the relationship between her and Kyle but it rips apart the alliance between the Sinestro and The Green Lantern Corps. Natu’s heel turn felt similar to Hulk Hogan’s heel turn back in 1996 (yes I’m talking about pro wrestling, deal with it). Once you see the moment of betrayal, you as a viewer/reader are in utter disbelief. Where will Natu and her Sinestro Corps appear next? Only time will tell. 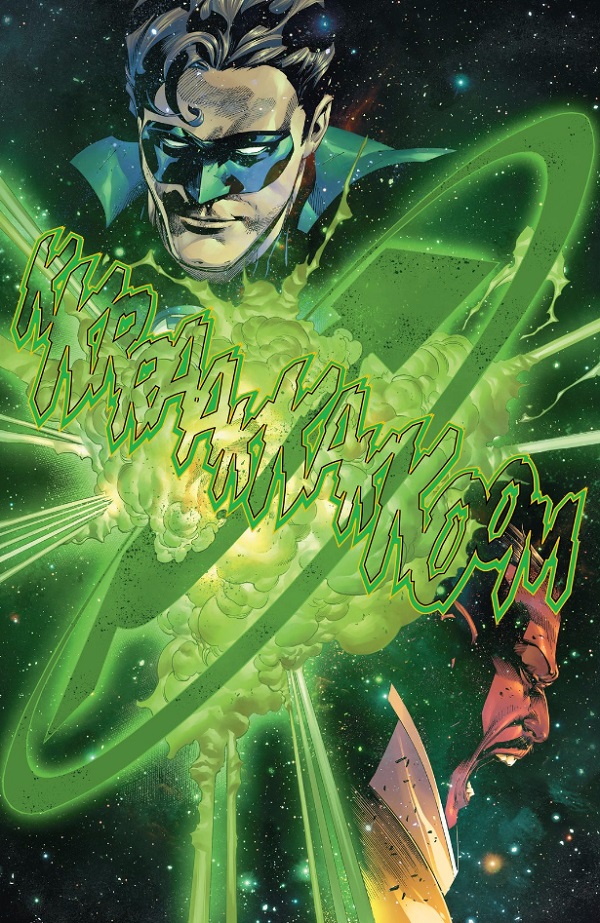 Listen I love my character moments in comics, it’s why I wake up every Wednesday morning to get a new batch of comics. However I also go to see epic stuff that I will never see in television or the movie screen. One of the more unique ideas that Venditti brought to with new series was Hal becoming pure will, a concept that even now blows my mind just thinking about it. I mean after all, if any Green Lantern could actually become pure willpower, it’s gonna be Hal “Highball” Jordan. A major reason as to why this moment is this high is mainly due to Rafa Sandoval’ beautiful pencils, but it was nice seeing Hal become this omnipotent being without losing his sanity and destroying the Green Lantern Corps. Plus this particular achievement lead to the “death” of Sinestro, but this is comics and death is a ever revolving door. 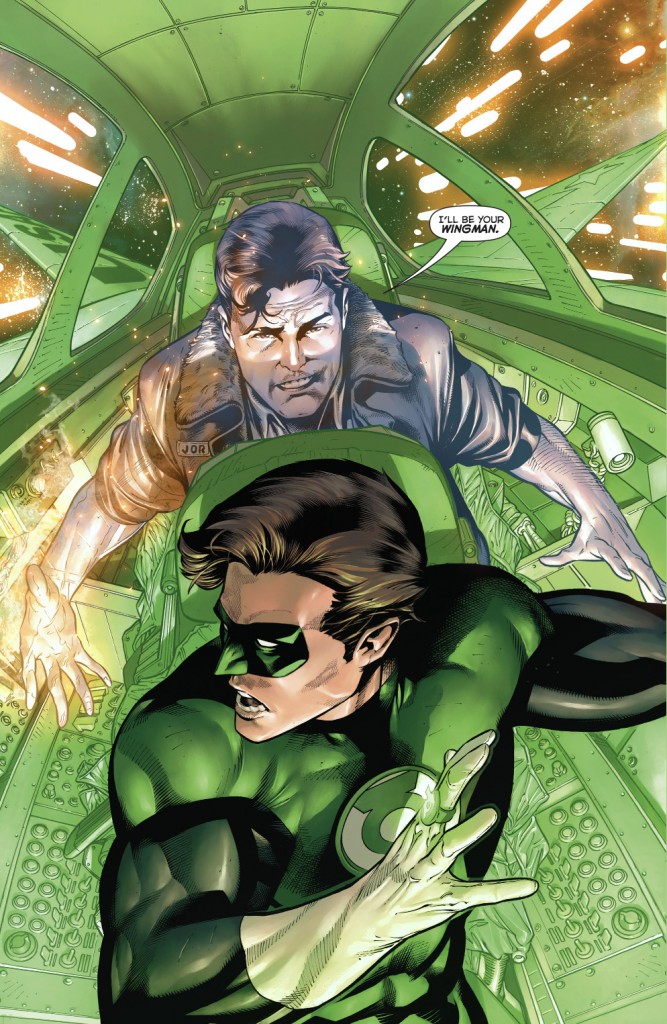 There are many factors that define Hal Jordan a great character. His deep connection with his fellow Lanterns, his unbending willpower, his defiance in the face of authority, or maybe it’s that one time he wiped out the universe due to grief he felt due to his own guilt (not that Parallax nonsense). However for me, it’s always been the death of his father Martin Jordan. It was the moment that showed Hal what true fear was, life without the man who was the world to him, and no matter how much a character grows they will never get over the lost a close loved one (just ask Spider-Man). So in the one of the most heartwarming moments within this series, was Hal seeing his father (as he chases down Lightray the New God). It’s a moment that anybody can relate to, cause we’ve all  had a moment as adults where we would wanted our parents advising us as they did before. I’m going to be honest with you, once I saw Martin Jordan appear and he wasn’t a construct, I started to cry. A beautiful moment within a cosmic space chase for the ages.

#5: The Unification of Two Corps

The enemy of my enemy is my friend. There are only so many surprises left to be found within superhero comics, over 80’s years of it can be difficult to find new ways to tell interesting stories with these characters that span at minimum 60 years. However Robert Venditti did something that no fan could have seen coming (unless you read the advance solicits). Putting the Sinestro Corps and The Green Lantern Corps together is one of those ideas that is super obvious, but because it’s super obvious no writer thought of bringing them together. It brought a fresh new dynamic to the mythos, it also brought a sense of tension that can only be achieved because of this group dynamic. However as much as I loved seeing these two former warring corps attempt to work together, I personally felt this concept was fully explored. Still a great and shocking moment.

#4 Hal Creates His Own Ring 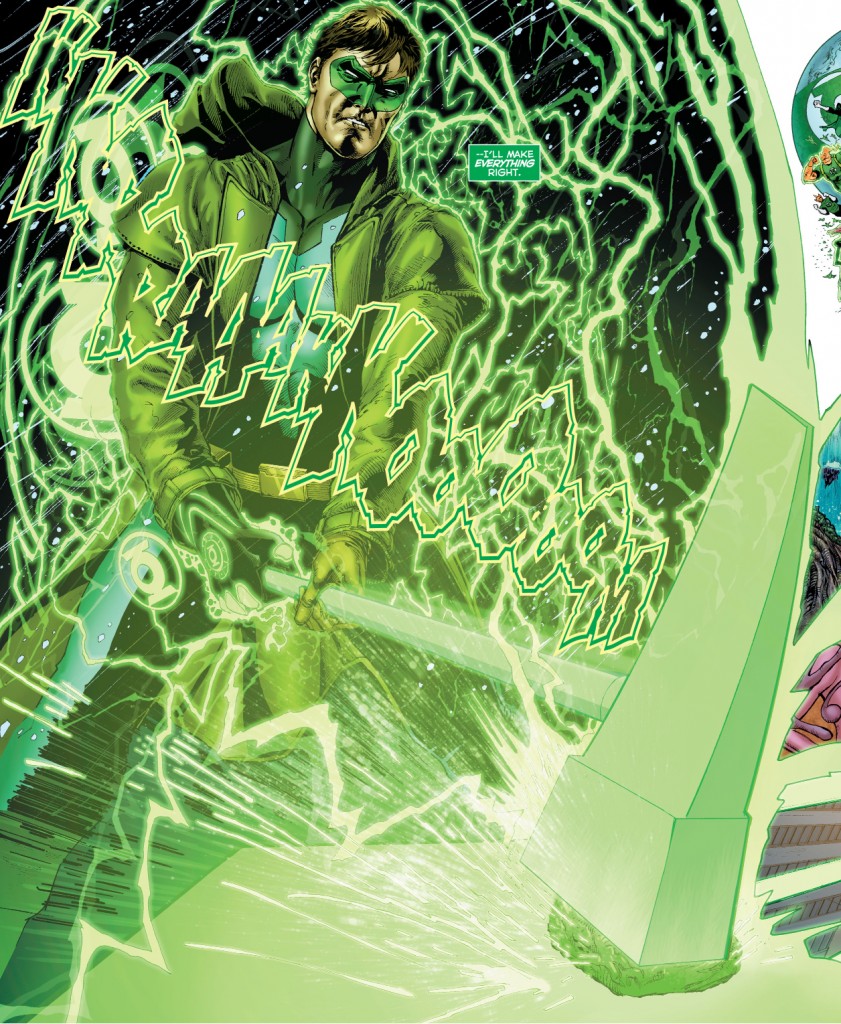 Would you look at that, Hal Jordan’s name featured once again. What are the odds? When starting a new series, you need to find a way to hook your audience right from the start. Even if this new series is simply a continuation of a previous one, you can’t assume that all of those readers will simply jump onto this new series. So what does Venditti do to not only entice lapsed and new readers? He has Hal create his own god damn Green Lantern ring, If you’re relatively new to the Green Lantern mythos then this might seem as special as I am making it out to be. This moment was the signal that this new series would be filled with moments that you’ve never seen before, I mean let’s be real here, if there was one Earth based Green Lantern that could forge his own ring, it’s gonna be Hal Jordan. 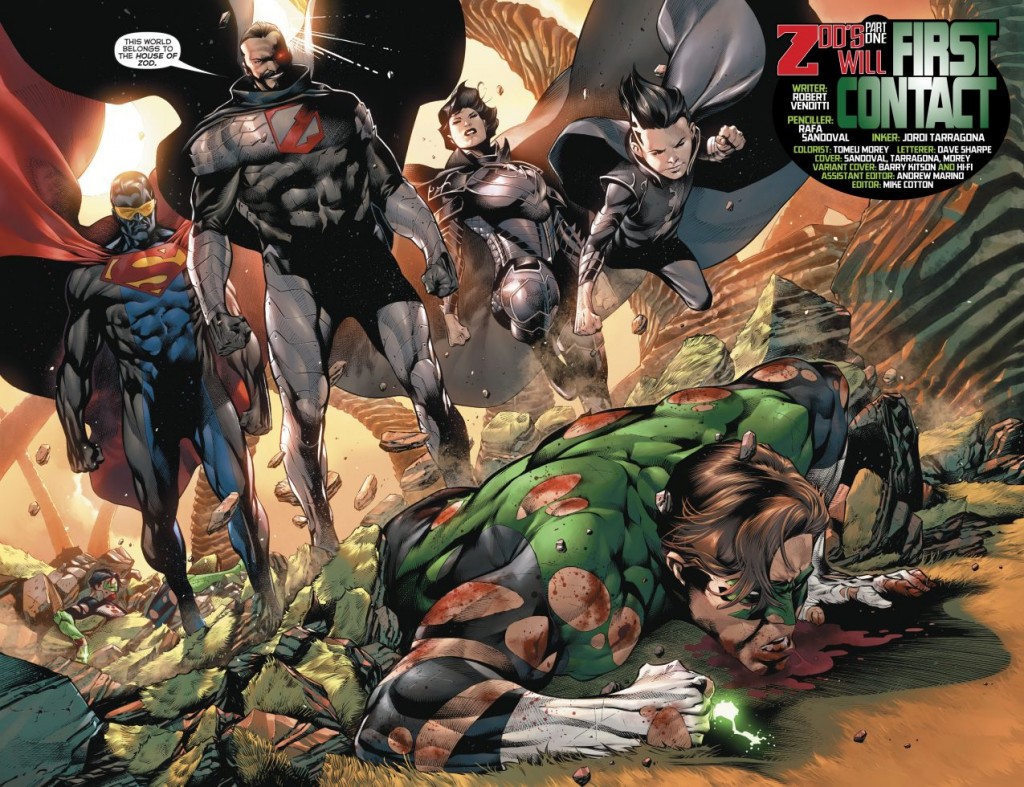 Do you know that doesn’t happen nearly enough in comics? Villains and heroes fight other villains and heroes. You’ll see Superman punch the hell out of Doomsday, you’ll see Batman stop The Joker from killing all of Gotham City, and you’ll more than likely see Black Manta try to murder Aquaman. There are very few instances where you’ll see The Flash face off against Ra’s Al Ghul for instance, but Venditti decided to add to this small pool of crossovers by giving us the brutality that was The Green Lantern Corps Vs. General Zod. Now one might think that this fight would be one sided and you would be mostly right. The sheer brutality between Zod’s family and the Corps was unprecedented, I can still visualize Kyle with a broken arm, beaten nearly to death. Maybe having different heroes and villains battle each other might not be such a great idea after, because then seeing Zod pummel the best of the Green Lantern Corps might not have been nearly as special. 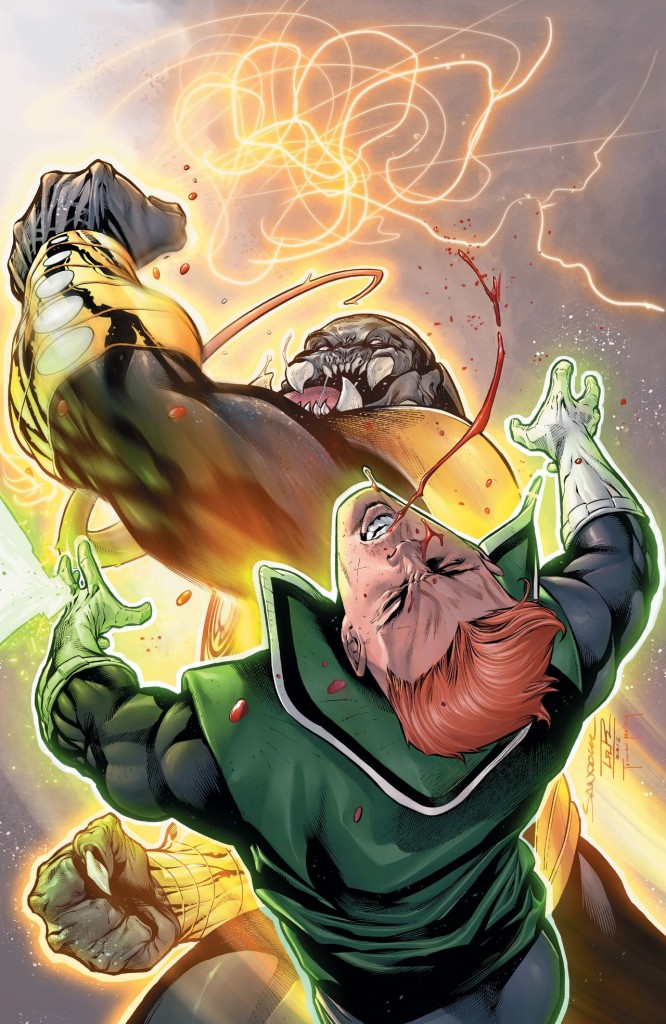 If you thought the alliance between Sinestro and Green Lantern Corps was unique, then I present with you the strange friendship between Guy Gardner and Arkillo (does Arkillo have a last name?). What makes this pairing really incredible is how organic it was, it took a slug fest between the two hard heads to see that both of them have a mutual respect for each other. It’s unfortunate that due to the Sinestro and Green Lantern Corps splitting, it cut short this beautiful partnership. However, the real reason their friendship is so high on this list, is the near confrontation as Guy was about to murder his own father. Now I understand that the only reason Guy was in a Darkstar amor was to understand the psyche of his enemy, it doesn’t lessen the impact that it was Arkillo’s words and concern for his friend that pulled Guy from murdering the man who caused him so much pain as a child. It is our friends after all who can pull us out of our deepest holes. 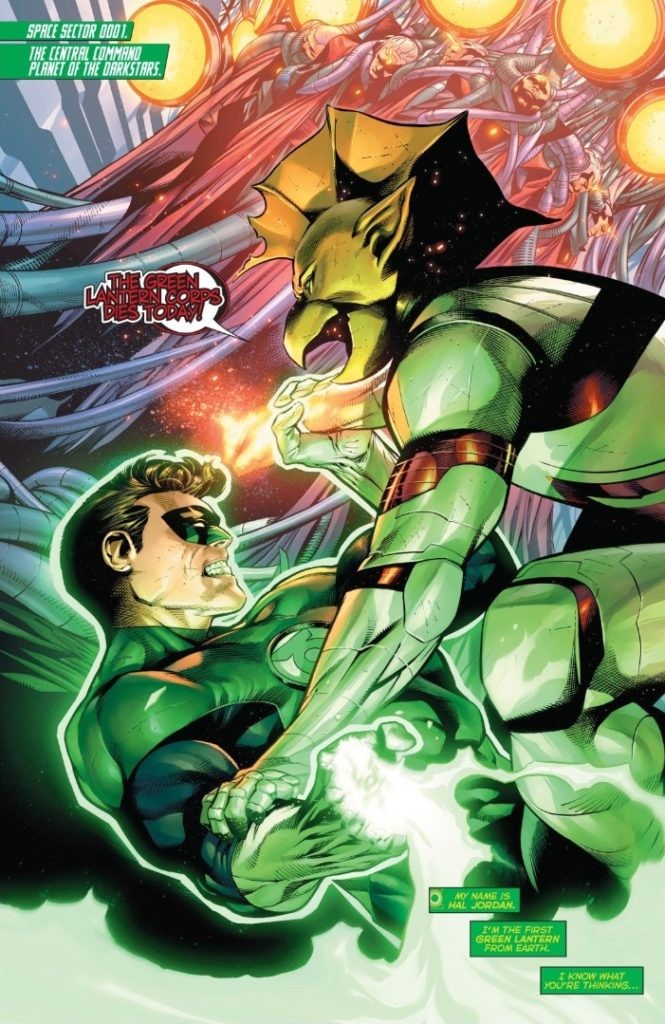 None of us are above evil. just ask Hal Jordan. Now I need to be completely honest, I had no opinion of Tomar-Tu as a character. He was always a presence that was never really appreciated. Tomar-Tu didn’t carry the lovable gruff that Kilowog is known for, or the scientific prowess that Saleek possessed. One might think that taking a character as blank as Tomar-Tu was, wouldn’t have the impact it would eventually have but Venditti managed to scrape enough pieces to get me to actually care about Tomar’s fall from grace. This was a character who committed one the most heinous acts that a Green Lantern could do, a character who tarnished his father’s legacy, a character back into a corner and was given a weapon to carry out his pain. It wasn’t until his Tomar’s final fight with Hal that I felt sorry for his lost soul. I’ll admit that this isn’t the cheeriest moment from the series, nor the most epic, but it’s one that I personally felt had the biggest impact. Not every writer can take a back round character and give them enough emotional depth to care about his eventual suicide. Powerful writing indeed.

Hal Jordan and the Green Lantern Corps is a series I won’t forget anytime soon. What are some of your favorite moments from this series? Please list them in the comments below or hit our Twitter!