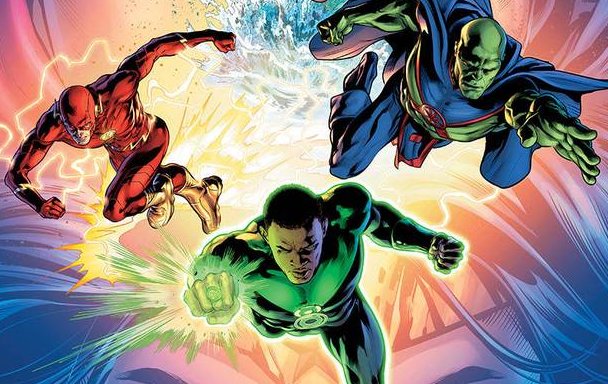 Listen….can you hear it….The universe is calling out. One factor that I am loving with Scott Synder’s run on Justice League is how massive this story is. Now that isn’t always felt every single issue, but it’s a constant shadowing harrowing over the horizon. It’s catering to the best aspects of not only the Justice League, but the entire DCU. Synder doesn’t want to tell a mundane JL stories, Synder wants to make you expand your universe. Warning the following review will contain spoilers. You have been warned.

Having two artists on one comic can result in how a reader perceives a comic. When done properly, the use of dual artist can still maintain the visual flow of the comic, without jarring the reader. In the worst instance, pages will look inconsistent therefore taking the reader out of any immersion that they might have found. While I’m not the biggest fan of duo artists on a comic, the format of this issue justifies the practice. While most fans will want more of Jim Cheung’s pencils, but Stephen Segovia’s pencils are nothing to slouch at. Segovia does a great job of making Thanagar Prime feel right out of Flash Gordon, epic in scale. Even though Segovia’s style doesn’t match Cheung 1 to 1, but his style is similar enough so the transition (while still noticeable) isn’t as jarring as one might expect. I know that some fans might overlook Segovia’s pencils, my personal favorite being Martian Manhunter transforming into a Thanagarian God.

Oddly enough this issue is clearly a exposition dump. and unfortunately it does little to hold the readers attention. Which is a shame because this issue actually sets into motion, the bigger story that I’m assuming Synder has been setting up since No Justice from last year, Basically if you wanted more action because of the events of last issue, then you might be a bit disappointed. The action is here, but the focus is on establishing the new threat facing the Justice League. I will say that towards the end of the comic, I can’t tell if it’s Synder or Tynion but the dialog between J’onn and the Martian being held captured gave me chills. It felt like I was reading a comic written by H.P. Lovecraft, or maybe that’s how I get when the discussion of cosmic entities is brought up. Sadly the pages of dialog, combined exposition with a clash between the GLC and John Stewart, J’onn, and Hawkgirl this issue didn’t completely mesh for me.

While this issue wasn’t a home run, there’s still enough here to be enjoyed. If anything the final pages of this issue will most likely either freak you out (me) or will have sweating with anticipation over to this new mysterious threat that’s come about due to the League’s new status within the multiverse. Now if you’ll excuse me I need to hide underneath my blanket.