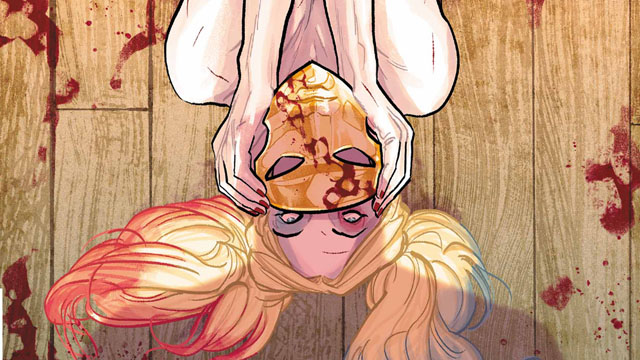 We’ve finally arrived, the final act of Heroes In Crisis. Controversy has surrounded this series since issue one, and despite my praise for the storytelling craft that both Tom King and Clay Mann (along with Mitch Gerad’s). I find myself barely hanging on to the crux of the story, or perhaps I’m missing the point entirely. There are aspects to Heroes In Crisis that I enjoy, and I can only hope that this series will lead to something huge as we reach the conclusion. Warning the following review will contain spoilers. You have been warned.

If you can’t remember, Heroes In Crisis was supposed to be a seven issue mini series that was turned into a nine issue series. This being the second of the “extra” issues that King felt he needed to fully tell this story. Instead of following up on Booster and Beetle upon the revelation that Wally West’s body was not “correct,” this issue halts the progression to a grinding stop to spotlight Wally West, Harley Quinn and Gnarrk. It doesn’t sit well with me that King decided to place this flashback issue here, yes this issue does shed light on what happened at Sanctuary it feels clunky to stick it here among several pages of heroes dealing with their inner torment, something we saw in the previous flashback issue.

Mental scaring is something that doesn’t heal quick or ever heal at all and I do applaud King for trying to tell this type of story with characters from the DCU, but when the overall plot suffers from it then I start to lose my attachment to it. Heroes In Crisis is now feeling needlessly drawn out, the deep emotional connection that I should be feeling wasn’t there for this issue. Plus I feel that it’s a bit of a cop out that it was the Psycho Pirate mask that caused the murders and not Booster or Harley. That could have been the redeeming moment, and it would make the story matter. Have Booster or Harley snap to the abuse they’ve suffered. Instead it’s based on emotional manipulations of a mask that will allow the characters to absolve them of any murders committed. My question is, why in the world would the Psycho Pirate mask not be in a lock up on the JL watchtower?

The one consistent aspect to Heroes In Crisis, is the art. Even though I have a problem with the issue’s structure in the grand scheme of things, the art continues to be the shinning beacon. Gerad’s art style blends perfectly with Mann’s pencils, the transition between the interviews to the main story is astonishing. Any emotion that I did feel as I read this chapter, was all due to Gerad’s pencils. The emotion he puts into the page is breathtaking. Remove the dialog from that page of Poison Ivy consoling Harley tells the reader all they need to know.

The magic around is this series is starting to wane. It’s a shame really, I do believe the story that King wants to tell does have a place, but it just isn’t working for me and from what I can tell about the larger comics community, it isn’t gelling with them either.