Teamwork is an essential part of daily life, despite the fact you have many self proclaimed “lone wolfs” who feel they can handle any challenge on their own despite the odds. Yet at the end of the day we each need other to overcome the obstacles that we as individuals can’t overcome. Heck that’s why the Justice League formed in the first place, and why there are thousands of Green Lanterns instead of just one (except for that one time from 94 to 04). How does that all factor in today’s issue of Hal & The GLC? Read further on and beware spoilers are bound.

Before I begin praising the comic I still feel that some criticism towards the pacing of this story needs to be mentioned. It’s four issues in and while I am enjoying the high octane science fiction action that Venditti and Sandoval have brought back to Hal Jordan, it oddly feels that the story is really taking it’s time to actually develop. Which is intriguing because this book ships bi-weekly which would mean that the story arc would come to a quicker conclusion in real time. Perhaps Venditti has a bigger story arc planned that it needs to be drawn out in order for readers to actually care about the machinations of both Sinestro and his corps along with the eventual reunion of Hal and the returning GLC. While this issue did shed light on more of Sinestro’s intentions, the plot itself remains at a standstill.

Part of me believes that the reason Venditti is drawing out this first arc is that he wants to establish both Corps as well as their titular commanders, but also because he loves writing the voices for these respective characters. Even though Hal doesn’t have nearly as much dialogue as his counterpart, it’s balanced with his classic heroism and of course his do or die mentality. While the Renagade examined a lot of Hal’s character, this series so far is more about Hal’s actions and that’s how Hal himself expresses himself as a character to the fans. Some might be annoyed by the lack of nuance but I’m sure this is intentional as other Green Lanterns will fill this role while Hal can just be the gunslinger. 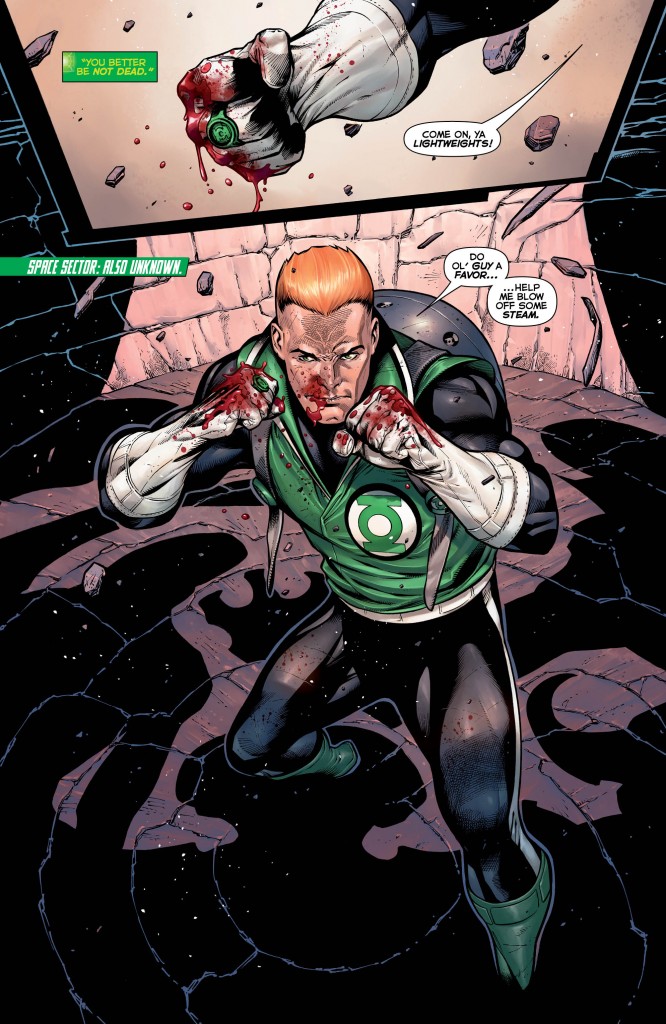 However the star of this series so far is Rafa Sandoval on pencils, as he continues to deliver amazing art. A lot comic art that most readers will seen on any given day will mostly likely be forgotten. This isn’t a knock on the hardworking comic artists out there, but rather the reality that sometimes the story they are given doesn’t allow the artist to show off amazing storytelling and dynamic action scenes. Images like John Stewart huddling over a table as he tries to contact Guy, or Hal’s cockiness as he faces down a horde of Yellow Lanterns or even Guy’s own arrogance as he faces down whatever he happens to be facing. Just reading this issue makes me feel that Venditti has tailored this book to let Sandoval let it rip. 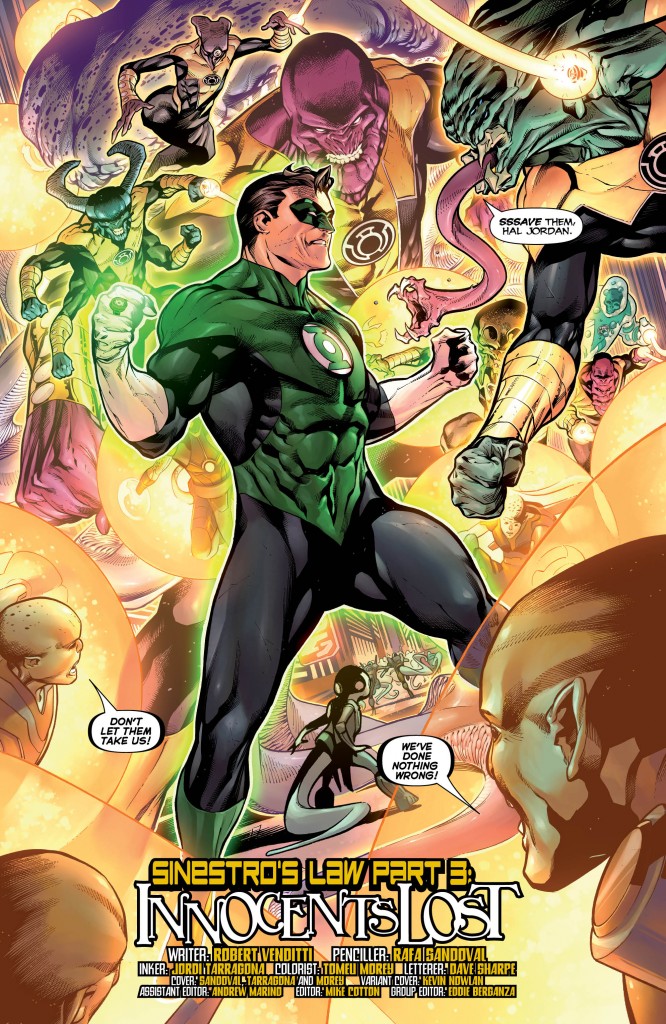 On a minor note, I did enjoy that Venditti is making the effort to make the Sinestro Corps grunts actually feel formidable. Sandoval’s page where Hal overcomes a seemingly endless sea of yellow tentacles, only to be overwhelmed by fear. Which all circles back to how I started this review that Venditti is demonstrating that not even the lone will power of Hal Jordan can overcome the growing fear in the universe. It gives reasons why the Green Lanterns need to reunite and reinforces the concept that we are stronger together. I still have problems with the pacing but I am enjoying this series, and the art being amazing and consistent is a big reason why.

One Response to “REVIEW: Hal Jordan and the Green Lantern Corps #3”