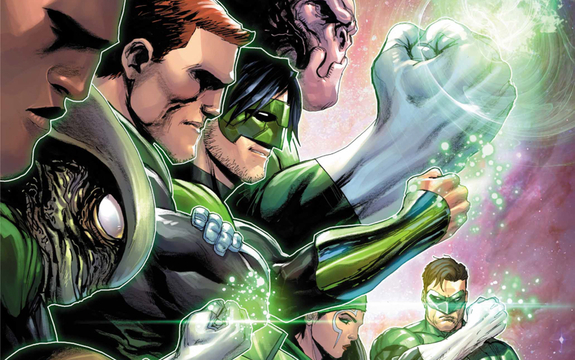 The time has come, the epic series finale that we’ve all been waiting for. A final showdown between two warring factions, both who have their own ways of enforcing peace. Will this issue nail the landing? Warning the following review will contain spoilers, so please read your comic before reading this review. Trust me you don’t want this one spoiled for you. You have been warned.

How do you make a epic battle feel intimate? How can you make your readers feel connected to what they are seeing on the page, outside of epic splash spages and cool quips? I’ll tell you how Venditti made this gigantic space battle that will decide the fate of the universe, he put the emphasis on the fight between Hal and Tomar-Tu. Their conflict, one that takes place on a physical and philosophical plane. Each factions method for protecting the universe can be boiled down to these two former friends. What’s even better is that Venditti doesn’t make this a one sided confrontation, he understands that great villains are the ones that we as regular people can relate to.

In tandem to the Tomar-Tu/Hal fight, one of the better aspects is seeing Tomar slowly become more emotional as the fight progresses. You can tell by his words and by Sandoval’s excellent storytelling, Tomar is a desperate man as he slowly realizes that his cause is losing, but also he begins to open himself up emotionally. The character arc that Tomar has been one has been phenomenal. and it’s perfect crescendo as he morphs back to the scared little boy who lost his father to circumstances he couldn’t control. The moment Tomar-Tu actually vocalizes the pain that his smoldering inside him, I’ll admit that I did cry a bit. Even if you don’t have the deepest connection to this character, on a primal level you can understand the pain of this fallen Green Lantern.

I will continue to say this, but Rafa Sandoval deserves to be one of DC”s premier artists. The amount of work that he puts into a single page is staggering, The first double page spread brings you right into the action, and I looked that page for at least fifteen minutes before moving on. He manages to give personality within these gigantic space conflicts, most of them will go unnoticed by most comic fans but I love the effort that he puts into these pages. Albeit there were a few issues where I questioned his anatomy for Hal during his fight with Tomar-Tu but given the rest of his work, that’s going to be a minor nitpick. Seriously DC, please have Rafa be on big title going forward, he deserves it.

So now the question needs to be asked, did this issue nail the landing. I firmly believe it did, it resolved the Hal turned into Will power in a logical way and it sets the stage for what comes next for Hal Jordan & The Green Lantern Corps. Some fans might not like that Tomar killed himself, but personally I saw no other option than for him die. Not because of the amount of death that he has dealt (Joker’s still around) but rather the emotional weight that he carried with him combined with his action as a Darkstar. Tomar-Tu should be shown as a comic of how to write a compelling downward spiral for a hero, because his is believable.

I’m going to miss Venditti writing these characters, it’s been five years since he joined the Green team and I’m glad that I was there to review a majority of his run. So if you’re reading this, after you’ve read your comic please do me a favor and make the number 4 with your finger and raise to the sky. The Four Corpsmen ride on. Thank you Robert Venditti for this historic run on Green Lantern, and thank you Rafa Sandoval for the amazing art, you’ve made me a fan for life. Burn bright Lanterns.