In Hal Jordan and the Green Lantern Corps #47, Robert Venditti joins with Arttist Fernando Pasarin to finally get down to the climax of the ‘Darkstars Rising’ arc. Spoilers ahead!

“Rising” has so far been a deliberately all-over-the-place storyline which while off-putting has also featured all of the hallmarks of Venditti’s great run so far. Venditti has excelled as “pop” storyteller. He’s had grand, sweeping stories that still manage to feature fun bits of characterization in every issue. High concept and self contained while narratively structured around his characters. Perfect blockbuster fare.
This issue continues the unconventional way this arc has played out. Instead of directly dealing with the matter at hand, our dudes have instead has gone on divergent roads trips to recruit villains previously featured in his run. Indeed it’s fairly obvious that Venditti is running through his “greatest hits” as his time in this corner of the DC universe comes to a close. And while it is pretty inorganic, the content of the story is just that entertaining that I don’t even care. Sure there’s this nagging feeling that maybe our heroes could be doing more about the quasi-cyborg facists rampaging across the galaxy killing at will. And you can give yourself a scab scratching your head wondering why they don’t just call some other superheroes. But the Hector Hammond stuff is a hoot! John Stewart’s plans are working for once! Space Cabbie!
In this issue, we seem to pretty much wrap up all the recruitment stuff in ways that are mostly satisfying. Stewart’s decision last issue to bait Zod into massacring friends of his makes more sense now that we know his plan actually involved getting Kryptonian technology (which I guess Superman doesn’t have?). It’s a little deus ex machina and obviously just Venditti trying to get Zod back in the game. But you understand why. Everyone loves Zod! And after what’s been frankly a series of near disasters of Corps leadership by Stewart the story’s finally got him coming across like he’s a few steps ahead (with Kilowog heavy handedly foreshadowing more to come by issues end).

The strongest part of the issue was Hal’s story. Under Venditti Hal’s character has become more streamlined and I’ve found him a lot easier to root for. The idea that Hal has suddenly had DEEP THOUGHTS about murder as a solution felt a little tacked on this run; Venditti’s story has mentioned it in passing really and Hal is so often singled-minded it hasn’t really clicked for me. At the same time, it reminds us that (though the canon is a bit ambiguous) Hal has had these thoughts before and acting on them – becoming Parallax – has fueled pretty much every Hal story for the last few decades. So it’s odd that it hasn’t come up all that much (or at all). But perhaps that’s wise. Venditti comes up with a pretty quick way for Hal to confront those feelings and seemingly move on for good, all within the confines of the story he’s told over his last nearly hundred issues. It seems a little offhanded how quickly it’s resolved but that’s been fitting with Venditti’s Hal. He’s sorta confronted all sorts of “big issues” in this run. Like legacy, morality, even his own death. But mostly he’s literally just flown through them. But with the energy and fun Venditti’s brought to the character it’s been a feature not a bug. The clever twist – taking a potentially disastrous (and sorta hackneyed) supervillain mind control story and making it a sort of twisted therapy actually helps. Venditti’s greatest strength as a writer of these space epics has been his ability to come up with just the right details or switcharoo to make something potentially stale really sing. It’s the stuff we love packaged in just the right way to make us remember why we love it in the first place. 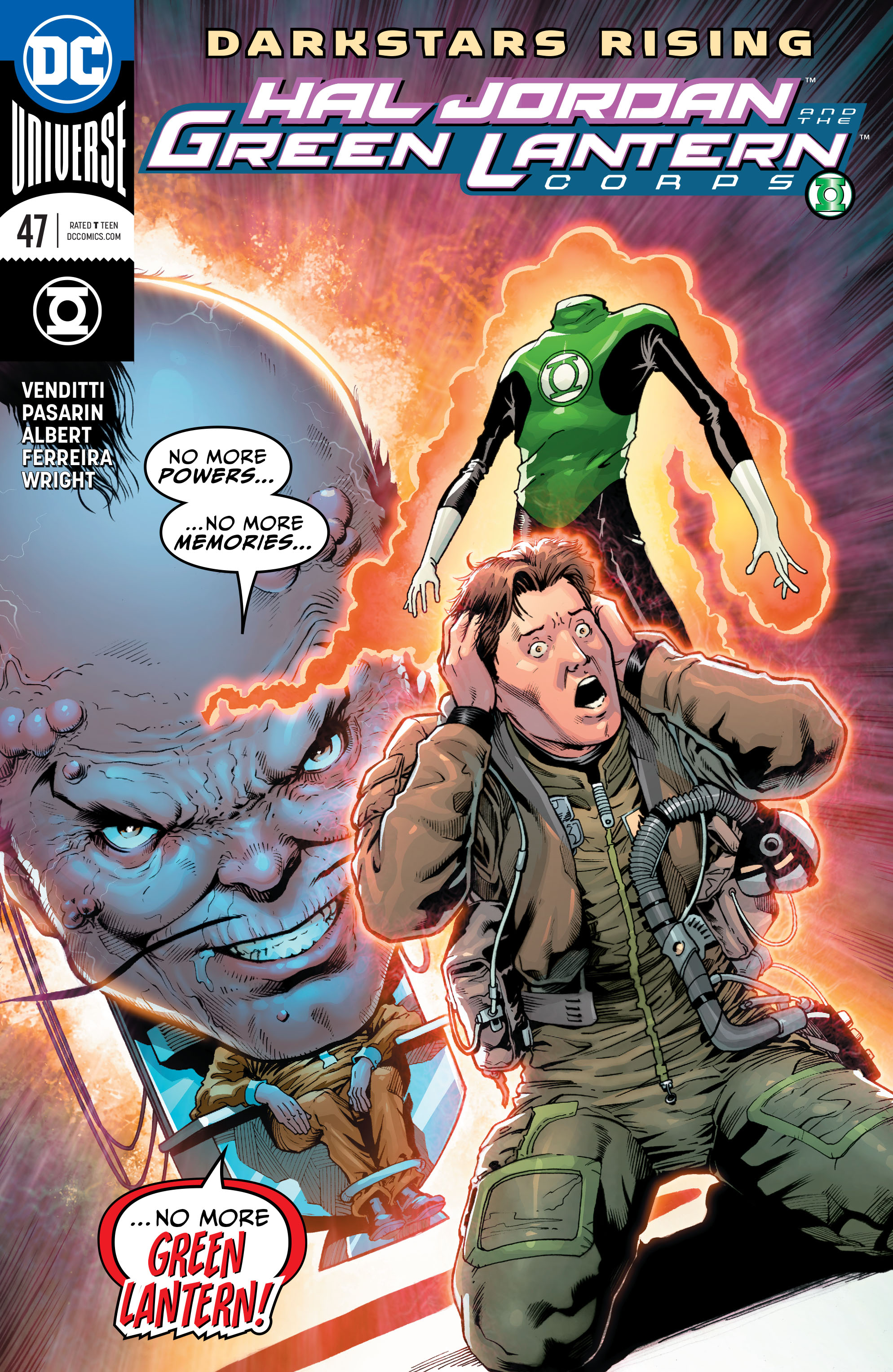 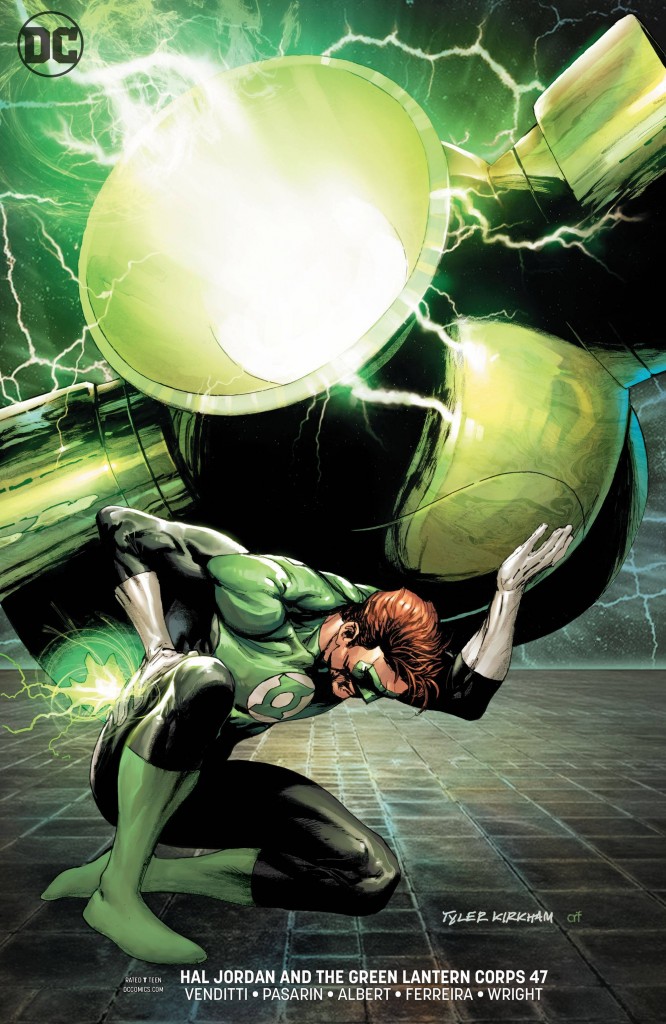 This issue has cleverly timed bits of writing to give maximum narrative impact and Pasarin kills it every time. The reveal of Hal’s cave is majestic but subtle; the background being the overwhelming part of the image but there being almost a grace in the small isolation of his still standing construct. And with minimal space the final pages convey the suspense of the moment and the terrifying coldness of the Darkstars as they enter their endgame. The last image is pitch perfect and considering the derivations the story has gotten into the last few issues does a lot of heavy lifting in terms of pulling us right into the main conflict. And also Mogo looks fucking dope.
Pasarin has been one of a few unsung heroes at DC, and he’s easily one of the best of many artists working on GL books today. He’s criminally overlooked. Especially compared to the star artist in rotation Van Sciver who has fun designs but his sense of perspective and space is as warped as his worldview. Pasarin needs to get a big gig. With the right inker his name should be on one of those big flashy crossovers we all waste our paychecks on; maybe then we’d finally get a classic.
This issue has two covers I’ve seen (in modern comics how can we be sure how many there are), one by Barry Kitson and the other by Tyler Kirkham. I’m a fan of the former and in the past been a critic of the latter. In this instance, Kitson’s is fun as a deliberate throwback and as always has appealing structure and is pleasant to look at. However I think they should have leaned into the gimmick more as the overall effect is a bit halfbaked . Kirkham has actually been putting out some pretty cool covers the last little while on this book. Typically I just don’t like his style (it’s very much of a studio that I’ve never been a fan of) but the level of detail and laser focus on creating non-issue specific but iconic imagery is really paying off. The perspective seems a little off on this cover but it’s pretty fucking classy and feels like you get your money’s worth.
Overall the issue, and the arc in general, both swims and sinks due to Venditti’s atypical storytelling. And as usual he ends the issue with just the right oomph to make me want the next one. Out of all the serialized superhero books (and its biweekly!) on the stands Hal & the GL has been the most enjoyable and I’m legit bummed that it’s ending. Get it while it’s hot.