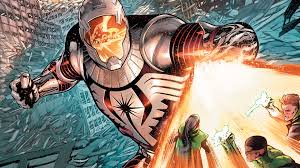 Duality is one of the greatest aspects or humanoid life. No one is born good or evil, we all have the capacity for both. Even the most stoic of heroes can succumb to darkness that lies inside. I mean look no further than Hal Jordan himself. Sure that event is not long canon (I don’t think it is?)but fans will never forget Jordan’s trip to the dark side. Perhaps another Lantern is fated to walk that very same path. Warning the following comic contain spoilers. So be sure to read your comic before continuing on. You have been warned.

Once I finished this issue I loved how Venditti managed to make this chapter both a cool down chapter, while also setting up this new arc. After all I believe the Green Lanterns deserve at least a small break after fighting against General Zod. With the exception of the last few pages, this opening salvo is mostly a conversation between Tomar-Tu and Hal. It’s not your typical breather issue that one might expect but it’s enough of a breather before all hell breaks lose at the closing part of this issue. Very well executed Mr. Venditti.

This entire issue hinges on a conversation between Hal and Tomar-Tu. At first glance this conversation between two friends who are in the opposite ends of life. What starts out as pure innocent slowly turns into a nightmare (at least for Hal). I always wondered in the back of my mind if Venditti would ever come back and revisit Tomar-Tu actions and this issue does. Tomar-Tu’s revelation that he would gladly kill his Sinestro Corps counterpart again and again might come out of left field for others but here you can actually understand Tomar-Tu’s point of view. Would I have preferred to have scenes prior to this chapter of Tomar-Tu so we could have seen his slow descent into madness? Yes but what’s here is just as good, and it works because you can see Tomar-Tu’s point of view. Plus I love how intense the conversation gets, with neither Hal nor Tomar-Tu screaming at each other. It’s the kind of intensity that can only be felt. Something tells me that we’re gonna get a emotional gut punch confrontation between Tomar-Tu and Hal before this arc concludes.

What else can I say about Ethan Van Sciver? I know I’ve asked myself this time after time, but each time he draws a issue of this series I always find something about his work to admire. While I’ve already praised Venditti writing between Tomar-Tu and Hal, it’s Van Sciver’s art that truly sells this particular sequence. One small detail that I noticed is that Tomar-Tu’s eyes began to shrink until his face became that of a stone cold killer. It’s a small aspect to observe but it’s a great example of amazing storytelling. One final note on in regarding new design for the Darkstars, it seems to me they share a similar look to the Manhunters. Obviously not as humanoid but their new look made me think about the Manhunters for some reason and somehow Van Sciver makes this latest iteration feel super unsettling.

Overall this was a amazing opening issue. It sets the tone for the inevitable emotional conflict between Tomar-Tu and the rest of the Green Lantern Corps, and it brings their newest foes to the forefront with no time wasted. Can’t wait to read the next issue.