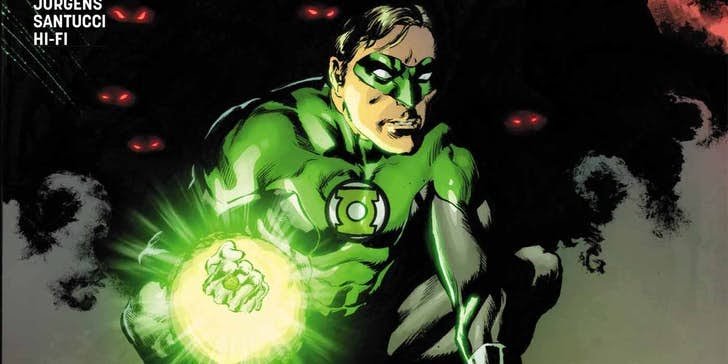 Epic space battles, a cosmic horror inside the central power batter, while a giant armada rains destruction upon a defenseless planet. Sounds like a normal day for the Corps. Warning the following review will contain spoilers, so remember to read your comic before going reading further. You have been warned.

As much as I enjoyed Mike Perkin’s pencils from the last two issues, I should have known that art change was coming eventually. So exit Mike Perkins and enter Marco Santucci, who was a pleasant surprise. Most of the time you see a new artist’s name, you’re not sure what to expect. However, Santucci’s art was nothing short of spectacular. I couldn’t help but feel like the art was emulating Star Wars during the space armada sequences. The beautiful wide shots that showcase the deadly warships hovering over the planet, even the closeups of the Green Lanterns reminded me of the close up shots for rebel fighters. The angles Santucci gives makes the battle feel as if you’re flying with the Green Lanterns. The only real problem I had with Santucci’s art is that his Kilowog was a bit to lean for my taste. Some of his faces are a bit rough, but his storytelling is super tight. While the inconsistent art continues to remain a problem, Santucci’s art was a welcomed surprise.

Despite the fact that, Perkin’s didn’t draw this issue I am still loving Dan Jurgen’s constant foreboding tone. Even though you have brighter color scheme, and the never say die attitude of the Green Lantern Corps, it still doesn’t shake away the unsettling feeling that you must have in your stomach. That foreboding tone is the strongest when the focus is shifted towards the Guardians dealing with John Stewart. While the sequences featuring the Corps felt like watching a Star Wars film, the sequences with the Guardians felt like a horror movie. One might think that this shifting might cause for a unpleasant reading experience, but Jurgens is a veteran writer for a reason. He understands how to make these feel connected without sacrificing their tones.

One of the bigger mysteries since this new arc started has been about Hal Jordan’s location. Thankfully Jurgen’s doesn’t reveal anything about the finale for Hal Jordan & The Green Lantern Corps, and while this isn’t Jurgen’s fault I still feel a disconnect because this story takes place after another story that hasn’t even finished yet. Really at the end of the day, the narrative for this story arc isn’t hurt due to H&THGL series finale. If anything the weakest part of this arc, is around this mysterious new villain who attacked John, while I’m willing to allow a vague mystery for new villains to make them seem more imposing, by the third issue I need something to hook on to. So far that isn’t the case with our mysterious blue friend, but the next issue teases the real villain that’s locked up inside the CPB so perhaps next issue will give me the information I seek.

While I’m still enjoying what Jurgens is doing, I’m desperately seeking a reason to care about the main plot. One might think a Guardian dying would be enough, but once you’ve read enough Green Lantern comics you tend to know most of the guardians don’t stay down for long. Santucci’s art was the biggest reason for my enjoyment of this issues, even though it was a bit rougher around the edges but still a fun surprise.