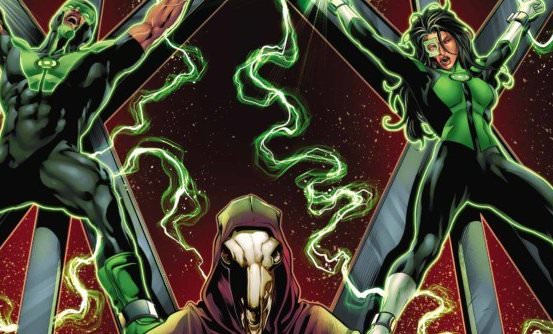 You know what’s an extremely touchy subject? The number one answer is politics of course, however right after that is any discussion pertaining to religion. When it comes to the world of superhero comics, religious themes have certainly played their roles over the course of 80 years of storytelling. It goes to show that you can have a civil discussion on what religion brings without wanting to wage war over a few words. Warning the following review will contain spoilers, so be sure to read your comic prior to reading this review. You have been warned.

Even though I don’t consider myself religious, I respect people who do. The scene with Simon and Jessica on a transport to rescue the missing heroes is not only a great example or religious tolerance but great development for Baz and Jessica as partners. While Jessica make come off a bit intolerant to those who follow a religious path, it’s due to her personal trauma rather than Seeley using her as a way to discuss the hypocrisy or religion. The fact that it leads to into Simon not raging at her but instead comforting her so that she can be ready for the fight ahead is a testament to their partnership. Simon and Jessica’s dynamic was already tight and this small scene made it even tighter,

You ever get to a twist and then slap yourself on the head when you should have realized it long before? That was me while our Green Lanterns rescued the heroes turned out to be brainwashed by the cult of the steed. I’m sure other readers might complain that this twist and the reveal that Night Pilot has also suffers the same fate, but I prefer the twist that is right in front of you, vs the twist that becomes so convoluted that it doesn’t make sense anymore. Plus Seeley saves the emotional gut punch for Simon by having discover that his crush is a tool for the baddies. Lesson learned kids, always double check who you’re saving, especially if they’ve been enslaved a cult.

No Barnaby Bagenda for this issue, but recurring artist V. Ken Marion returns. Even though I have a preference to Bagenda’s style, Marion does a solid job for this issue. His action scenes are bombastic and they flow from panel to panel effortlessly. His faces are not realistic by any means, they’re slightly exaggerated but not the point that it becomes comedic. It’s not his fault that Bagenda isn’t working on this chapter so I can’t fault him for that and while his style isn’t the same as Bagenda, it’s similar enough to not be jarring to readers.

Overall this was another entertaining chapter of Green Lanterns. As each chapter progresses I can feel Seeley become more comfortable with Jessica and Baz’s dynamic and it pleased me that he only manages to tease their relationship without revisiting the app joke again. I’m deeply interested to see how Baz’s passion for Night Pilot will collide with Jessica’s new infatuation towards Simon. I guess I’ll have to wait two weeks before I might get my answer.