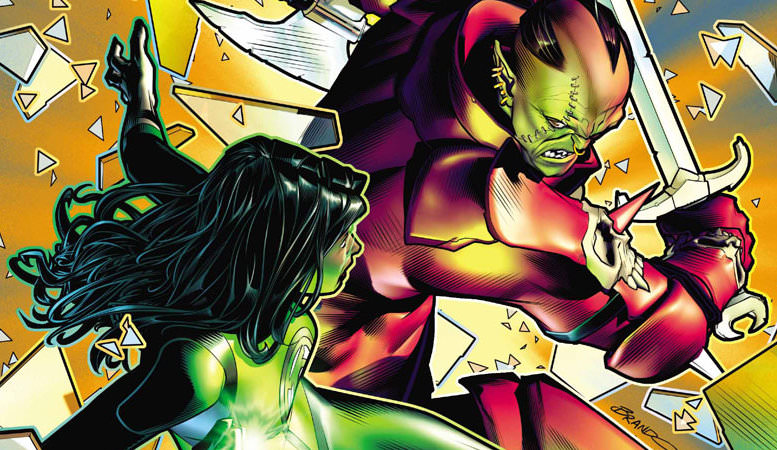 Ladies and gentlemen the impossible is about to occur! Only a few months ago over in Hal Jordan & The Green Lantern Corps, fans were graced with an appearance by Bolphunga! Well Bolphunga fans, Christmas comes early again! Warning they’re will be spoilers, so this is your friendly reminder to read your comics prior to reading my review. This is your final warning.

If there’s one aspect of Tim Seeley’s first batch of issues, is his ability to balance comedy with action. Unless a particular comic is going for a specific tone, whenever I read a superhero comic I crave for a balance. Not only does Seeley maintain a great balance between the different tones I love that it all feels natural. Having read tons of comics over my life, it’s pretty obvious when a writer attempts to be comedic and it just comes out as forced. Seeley’s comedy doesn’t feel forced, it feels completely natural and it flows effortlessly, perfect example being Jessica’s meeting with her manager about moving to waitress, but only to be interrupted by Bolphunga being a loud mouth. That opening page pacing was really well done and the moment when Jessica crashes through her place of employment (hope she still has a job) has actual impact because of the scene was executed perfectly.

One scene that I thought was a bit weird was Simon’s “morning after scene” When you look at these two pages nothing is inherently wrong with them I just never saw Simon as someone who would sleep around via a dating app. Within context of previous issues in mind, this scene is just a further extension of Simon adjusting to his new life (and love life if this scene means anything) and similar to Jessica it’s not going well. I’m hoping this Night Pilot character comes back in some fashion either in this arc or some fashion because I really liked her designed, plus how many it’s not to often that Green Lanterns tag team with other Green Lanterns (except the Justice League of course, but besides that).

Three issues in, and in this case it means a third different artist. I was hoping that finally we might retain some consistency in the art however that doesn’t seem likely going forward. Carlo Barberi’s art does a perfectly fine job of executing point A to point B. It’s nothing flashy nor it is terrible, I did have some issues with his art when it pertains to anatomy and certain facial expressions seemed a little muddled but those instances are few and far between. The best part of Barberi’s art was whenever he had to draw Bolphunga, as he perfectly captures the over the top nature of Bolphunga.

Green Lanterns was already a fun comic, but the added element of Bolphunga (plus his disappointed father) bring that element of fun to a whole new level. I’m interested to see how the plot on Ungara connects with the main story, but for now I’ll just have to wait.