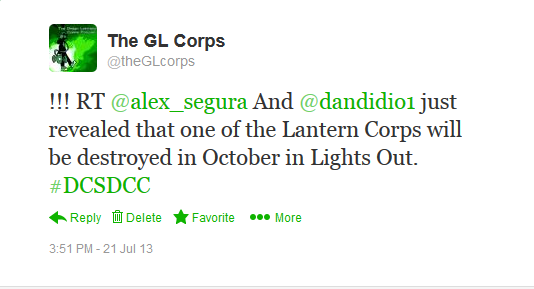 MTV got the exclusive but twitter is faster so for now, that’s all the info we have. Guess this definitely makes “Lights Out” an event to remember! Venditti and company look to shake things up in a big way in October…

MTV finally comes through with their video interview with Jim Lee and Dan DiDio dropping that bombshell of news. Check it out below.

Dan DiDio: “Well we can say…Tease! Tease. We can tease that one of the colored corps are destroyed in the course of this battle that takes place with this character that we’ve introduced called Relic. And its a new character, but an extremely old character that’s gonna really affect every aspect of the Green Lantern universe. He actually destroys one of the corps and also, the power battery.”

Jim Lee: “We’ve crossed over from tease to reveal! The publicist…”

Dan DiDio: “He’s dying right now! But then the idea is ‘What happens when the power battery runs dry to all the lanterns and all the rings?’ How do they defend the universe?’…..It all takes place in a single month, October, in the Green Lantern books. Its tight within the Green Lantern books, but you’ll see it affect other books throughout the DC Universe whole.”