A new adventure begins for the DC Super Hero Girls with a new comic book series, DC SUPER HERO GIRLS: SPACED OUT, available digitally. The new story is the next installment from the popular DC Super Hero Girls franchise, which includes animated movies, TV and webisodes, apparel, toys and publishing. Series writer Shea Fontana and artist Agnes Garbowska introduce the latest adventure featuring Jessica Cruz, Earth’s new Green Lantern, as she heads to Oa with some of her best friends to introduce herself to the Green Lantern Corps. The 12-chapter series begins Monday, November 20.

Fans of the DC SUPER HERO GIRLS series can hear all about the new tale by joining a special Facebook Live broadcast on the DC Kids page on Monday, November 13 at 3p.m. PST. Begin submitting questions now about the story and characters, including our favorite pup, Krypto the Super-Dog, by commenting on the DC Kids Facebook post, or by using #AskDCSuperHeroGirls via Twitter. 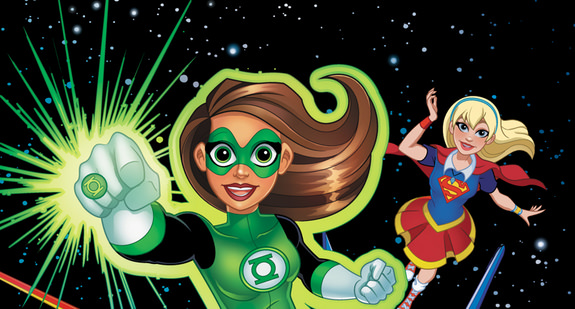 Jessica Cruz is the new girl at Super Hero High, and the newest Green Lantern of Earth. And if she thought learning how to control her powers was scary, she now must report to Oa to meet the rest of the Green Lantern Corps. Luckily, some of her new friends are willing to make the trip with her, but they never would have expected that they would be coming up against some of the biggest threats in the galaxy! Meanwhile, the earthbound students are faced with their own challenge—pet-sitting Krypto the Super-Dog, Supergirl’s adorable and feisty Kryptonian pup.